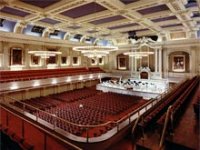 Mechanics Hall – Located at 321 Main Street, Worcester, MA. Mechanics Hall is the premier event venue and concert hall in Central Massachusetts. Renowned for its elegance and sound qualities, the Hall’s cultural significance, its stunning décor and architectural detail have earned it a listing on the National Register of Historic Places. The Hall is known as the finest pre-Civil War performance hall in America. Mechanics Hall is an acoustical masterpiece sought after by musicians and recording artists worldwide, and it is a beloved meeting space ideally suited for special events. Read More